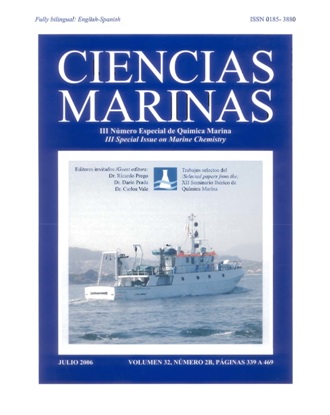 Concentrations of polychlorinated biphenyls (PCBs), p,p'-dichlorodiphenyltrichloroethane (DDT) and metabolites, and dieldrin were determined in muscle tissues of female and male sardines (Sardina pilchardus) obtained between February 2000 and January 2001 from purse-seine vessels operating off the coast of Peniche, Portugal. The concentration ranges (ng g–1 dw) in females and males were, respectively, 5.9–29 and 16–38 for PCBs, 1.6–8.5 and 3.2–11 for DDTs, and 0.09–2.4 and 0.18–2.9 for dieldrin. The annual fluctuation of organochlorines in muscle was attributed to the reproductive cycle of S. pilchardus and consequent variation of lipid content. Maximum organochlorine concentrations in muscle were found when the gonadosomatic index (GSI) increased during the final stages of gonad development and the beginning of spawning activity (November). During the final spawning period (February to May), the GSI decreased and concentrations were lower. This study suggests that elimination of PCBs in muscle is faster in females than in males because of transference to the gonad and the excretion of eggs.